If you’re in the process of upgrading or replacing your carpet, bear in mind that there’s a few things to be aware of when purchasing. In this article I’ll make you aware of a carpet phenomenon called “PILE REVERSAL”.

Pile Reversal (shading) is a permanent condition that affects mainly cut pile carpets, especially plush pile styles. Basically the carpet fibres bend over in some areas (mainly traffic areas), and create a significant shading effect due to the light being reflected off the side of the fibre, rather than absorbed as it is into the surrounding unaffected carpet. 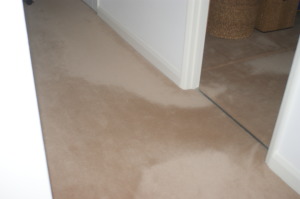 The effect can be so vivid in some carpets that it looks like the carpet has been flooded – hence the reason it’s commonly referred to as “POOLING”. There doesn’t appear to be any reliable info on the cause of this condition, and carpet manufacturers are quick to point out it’s not a manufacturing or design fault that causes it, and is therefore not covered under standard carpet warranties.

Here’s a link to a FAIR GO episode which covered the issue in 2011:

While the reporting produces some good info on the subject, I’d disagree with the idea that this is a rare occurrence on cut pile carpets. In fact, from what I’ve seen after cleaning thousands of carpets, my advice would be that PLUSH PILE carpets are very likely to develop the condition in a very short time, it’s just a matter of how severely it’s affected.

Standard cut pile carpets commonly show pile reversal but to a lesser degree in my experience. Loop pile carpets are very rarely affected to any visible degree. I’ve seen the condition on both wool and nylon carpets, and also plush pile polypropylene carpets.

The representative from Cavalier Bremworth in the Fair Go episode discusses differences between the long, straight pile of a plush pile carpet vs the resilience of a ‘hard twist’ cut pile carpet, and it’s higher resistance to the pile reversal issue. I’d go along with that, but buyers should beware that it could become an issue with their new carpet, particularly if it’s a plush pile style.

If you’re the type of consumer that wants your carpet to stay looking even and without shading (some people don’t seem to mind it at all), I’d say avoid the plush pile grades, ask many questions about any other cut pile carpet you may be considering, or look at the many types of loop pile carpets out there…